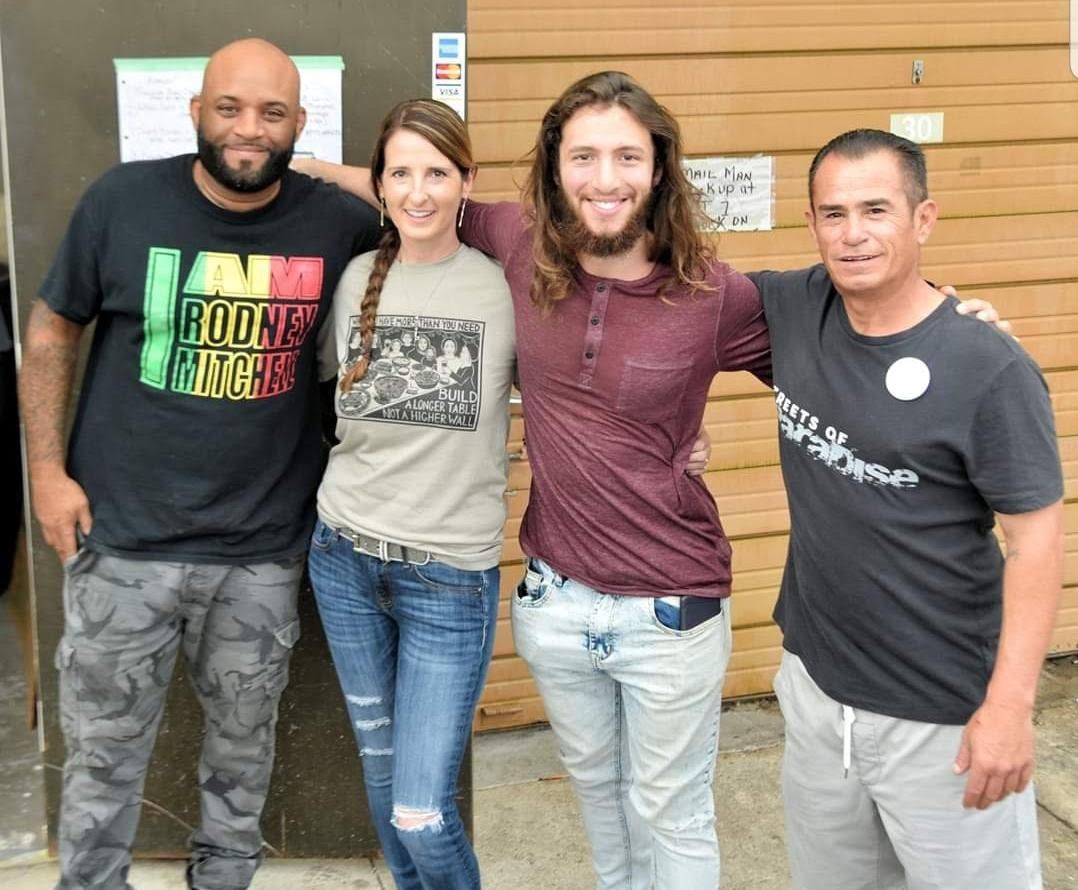 Written by Willa Tinsley ncfCatalyst on April 3, 2020. Posted in Featured.

“Buenas noches,” a man called out as he passed by us on the sidewalk.

“Oye, ¿cómo estás?” Cruz responded warmly, then continued explaining SOP’s ethos— “The people on the streets, we call them our ‘street family’” — without missing a beat. It is familiar rhetoric these days, when it seems the word “family” has crept into every employee onboarding video and underwear subscription ad, but somehow, coming from Cruz it did not sound hokey in the slightest.

SOP’s Wednesday food-shares really are like a giant family dinner, if your family were incredibly jovial, ethnically diverse and dined on the sidewalk by the downtown Salvation Army (SA). Twice Cruz’s daughter came up during the interview, clad in a little apron with her name on it to battle for her dad’s attention against the flock of volunteers, every homeless person in the Rosemary District and one overeager Catalyst reporter. There are always some kids helping out and observing at SOP events, which Cruz says is a perfect example of their efforts to reduce the stigma around homelessness.

“My daughter, she’s 12 years old, she’s been doing community service work since she was five. The first picture I have is her holding a free hotdog sign at five years old. We just went and got hot dogs and bottled water and set up on 41 to help people… that’s the perfect example of normalizing it, so people have compassion. These are our brothers, sisters, that’s somebody’s aunt.”

SOP’s legion of assiduous volunteers, mostly middle-aged women, mill about 9th Street and Lemon like honeybees with practical shoes on. Frequently they’ll stop to ask a question of Cruz or Cathy Bryant, SOP’s harried Director of Operations or chat with a member of the family— including me, a new face in the crowd. My arrival was treated like an everyday sort of miracle. Their eyes actually lit up when I said I was a first-timer.

The mood is hectic, convivial, seemingly impossibly joyful for a street where Sarasota’s untouchables sleep a few feet away from each other on cardboard sheets while people speed-walk past, clutching their handbags and averting their eyes. Dozens of people cluster on 9th Street at night, and it is generally a lifeless, muted scene. There is nothing funny, exciting or inspiring about it. They are human beings in abject poverty. A few blocks away, music and suntanned vacationers spill from the luxe restaurants onto the streets.

“If you look at the logo, you notice the word paradise is beat up and looks worn, and that was to show that depth of the have and have-nots,” Cruz explained. “Cause if you pick up any brochure, for instance, if you go to the tourist spot and ask for a brochure, and you’ve never been to Sarasota, they’re gonna show you the beaches, tell you about downtown, all the great restaurants, and all those are amazing places, but this is what happens on the street level in paradise.”

But in just two years, SOP has gone far beyond raising awareness of Sarasota’s homeless population. In addition to their Wednesday night food-shares, the photo-series-turned-501(c)(3) nonprofit now offers brunch on weekend mornings at Payne Park, clothes and hygiene services and house furnishings to formerly homeless people rehoused by the Continuum of Care, the city’s homelessness response team. The program previously put the homeless into entirely bare spaces.

“It was literally overlooked,” Cruz said,  “Like, nobody thought up to that point. It’s like, ‘Oh shit, now what?’ We spent so much money and were so focused on getting them housed and it was pretty much ‘now it’s on you,’ and people were literally moving in with a bag worth of stuff and sleeping on the floor. [The Continuum of Care] reached out to us, when they saw our grassroots thing building momentum. We went from just feeding people and showering people and clothing people to being part of the process of getting permanent housing, which is just so amazing.”

Third-year Akiva Packouz volunteered with Streets of Paradise during the month of Independent Study Project (ISP). Although the professional obligation has passed, he delights in continuing to work with SOP.

“You’re doing great work, fulfilling work,” Packouz said. “You give a few hours on a Saturday, and because of that families will have beds to sleep on, and kitchenware to cook their food with. ‘Cause these people’s homes are completely bare. And it’s personally fulfilling, cause you’re hanging out with good people doing good things. A lot of the volunteers were formerly homeless and got helped out by SOP. They had super interesting stories. I felt like I was being welcomed into a family.”

To Cathy Bryant, this is the vital magic of SOP. At its heart, it isn’t really about the food, or the furniture or even the rehousing, but family. Bryant understands the power of family. She has been an activist all her life and gave food to the homeless when it was illegal.

“What I saw and what I loved was that it wasn’t so much about ‘feeding people,’ you know, like, we weren’t ‘feeding the homeless’ — I really hate that term,” Bryant said. “We were creating community and we were creating a family. And it wasn’t even exclusive to the people who live out here– it was also the volunteers. They say that the most healthy people have five people they could call, if they needed something. And I don’t think a lot of us have that.”

Bryant now has three kids, one of whom has a degenerative brain condition. She once lost everything, including her house, to the medical bills, but is back on her feet and she often invites strangers into her home who are in the same situation she once knew.

“They may be aging out of foster care, they may have worked themselves off the streets, they may be coming out of the SA programs, but once they get into a house, we go in and furnish it top to bottom,” Bryant said. “They said people were 87 percent more likely to never face homelessness again if they moved into a furnished home. I get calls from people every day from people we’ve moved in before, saying ‘Hey I’m going through a hard time with this,’ or ‘I don’t have enough blankets,’ or ‘my roof fell down,’ and we can step in and fill these needs, which they may have otherwise had to spend their whole check on, and possibly have to face homelessness—or just, you know, loneliness. And that matters.”

SOP is a grassroots, entirely volunteer-based organization, so volunteer opportunities are very flexible. There is currently a need for administrative work—people making phone calls to confirm donation pick-ups and move-ins, check the group email, map routes and the ilk. They also need people for the “Muscle Team,” which handles the physical move-ins on Saturdays. “I think one of the reasons why streets of paradise has been so successful is the recognition that all of our gifts are worthy,” Bryant said. “If your gift is making macaroni and cheese, your gift is worthy. If your gift is logistics, helping get moves in order, your gift is worthy.”
Check out SOP at streetsofparadise.org to volunteer and learn more.