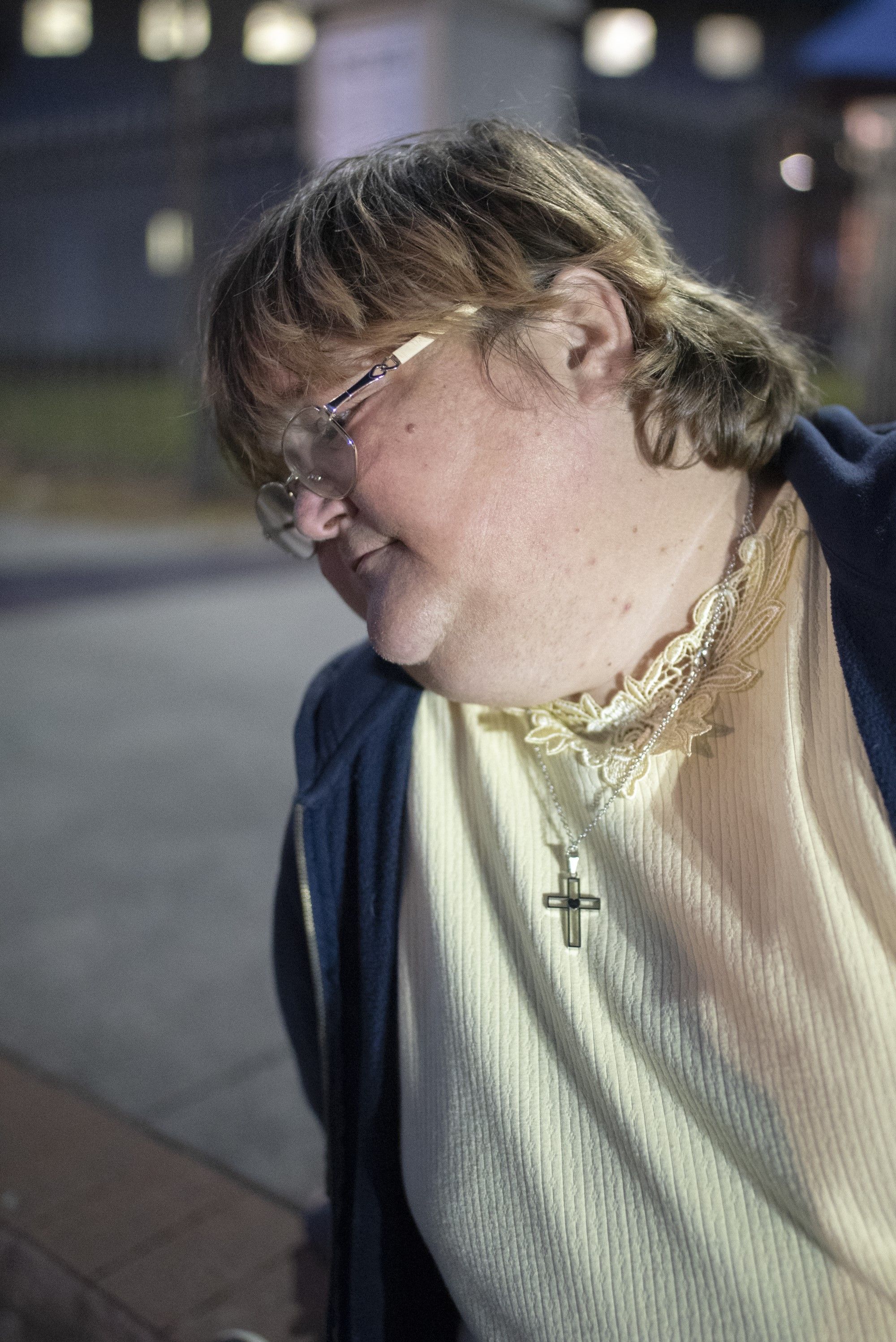 Written by Natasha Reisner on February 25, 2019. Posted in Featured, Stories.

I notice Stephanie on a Thursday evening after she takes a spoonful of delicious looking home-made butternut squash soup and a bite of cornbread, prepared by Streets of Paradise volunteers. I approach her and ask if she would be willing to chat with me. She graciously agrees. We try to get comfortable sitting on the sidewalk, she takes another bite of her cornbread and then slowly begins telling me her story.

She is 45 years old and has been homeless for one month. She sleeps outside of the Salvation Army on the sidewalk. It is cold and uncomfortable, especially on her back. She rarely has the $12 that would afford her sleeping inside the building. She smiles adding, “Anyway when you sleep at the Sally Army they wake you at 4:30 am when it’s still dark outside, even if it’s cold, you’ve got to leave the building, go out onto the street with all your bags and then line back up for breakfast at 9:00 am.”

She became homeless when her mother kicked her out of the house because she could not afford the $250 expected as a monthly rent payment. Stephanie wipes a tear from her left eye, “At 45 you never think that you’ll get kicked out by your own mother when you are trying to get it together after a violently abusive relationship.” I am struck by this and gently probe a little further.

Stephanie tells me that she worked for Kmart for 15 years and describes herself as a responsible, dependable employee. She always struggled financially, while she worked full time. A large percentage of her low income went towards paying for housing, which made it exceedingly difficult for her to make ends meet. A few months ago she received a ride from a friend and was involved in a terrible car accident. She sustained multiple injuries including several crushed spinal discs in her lower back. Her constant residual back pain made standing for prolonged periods unbearable and returning to her former employment impossible. Without any savings, she had limited options.

While recovering from the injuries sustained in the car accident and looking for alternative employment, her live-in boyfriend attacked her, punching her multiple times in the face, he then took her cell phone; repeatedly smashed it on her head, fracturing her skull and stabbing her hand. It took her months to recover from her physical injuries and she makes no mention of her emotional scars. Stepanie adds, “I lived through terrible domestic violence and now I’m homeless, I knew his temper was out of control. He was an evil man, he even stole my debit card after beating me up. ”

I find myself playing Stepanie’s story over and over in my head as I walk slowly towards my car at the end of the evening, processing our conversation. Hers is one of multiple interlocking and intersecting life events that led her to homelessness. According to the US Department of Housing and Urban Development domestic violence is the third leading cause of homelessness. She is a woman holding onto doubts, pain, vulnerability, and real concerns for her future. However, the Trump administration has cruel intentions including budgetary cuts for homeless services and has suggested eliminating the agency that coordinates the federal response to homelessness. If we close our eyes for a moment and picture Stephanie we cannot in clear conscience imagine a woman leaving her intimate partner violent relationship and facing the added trauma and uncertainty of homelessness without a support system.

“There may be times when we are powerless to prevent injustice, but there must never be a time when we fail to protest.”