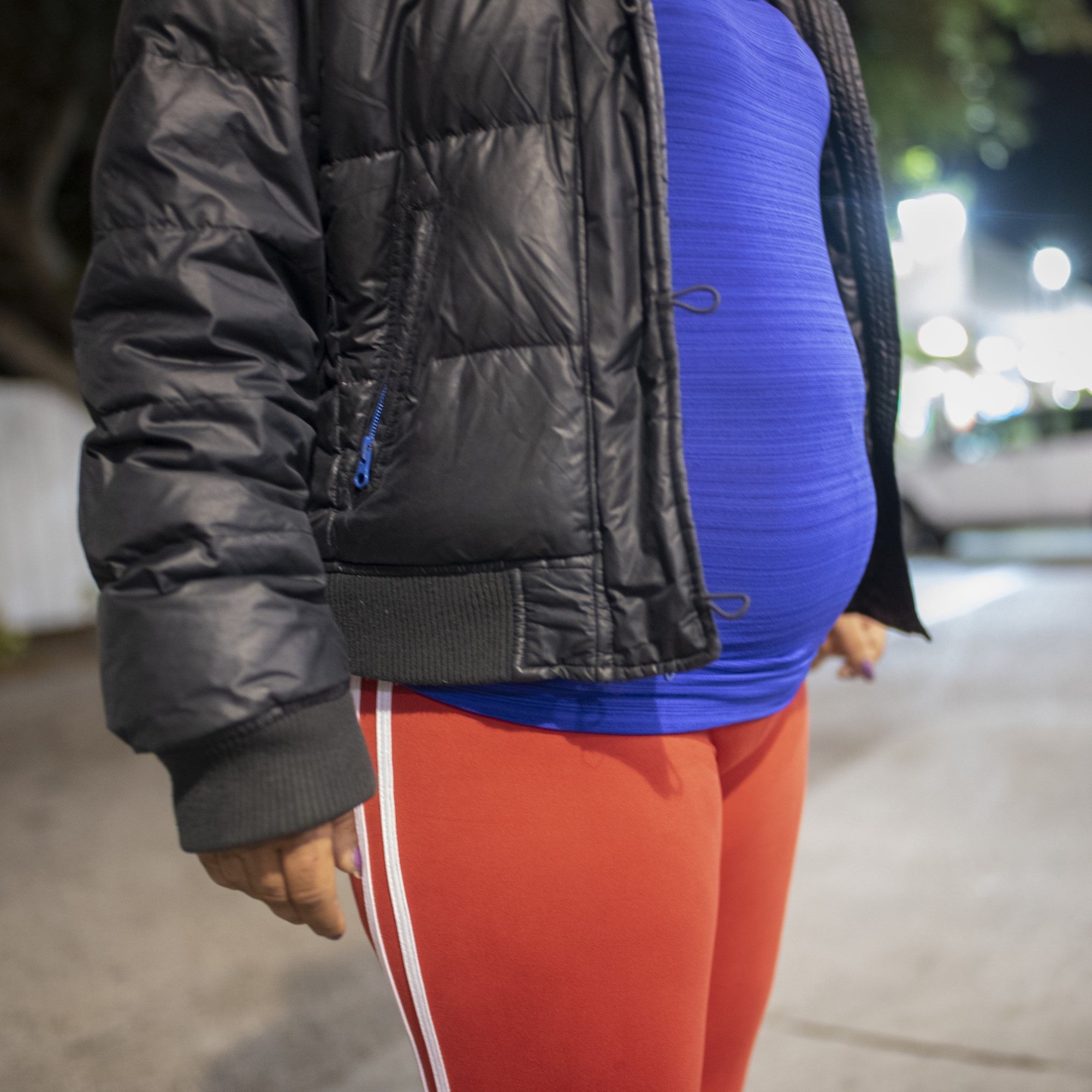 Written by Natasha Reisner on March 13, 2019. Posted in Featured, Stories.

We met Nikki outside a Sarasota gas station on a chilly Thursday evening. Nikki is a 34-year-old woman, and she is four and a half months pregnant with a visible baby bump. She has been living on the streets for a few months. She describes herself as a pregnant alcoholic and the black sheep of her family. She adds, “Everyone of us out here is a black sheep.” Her statement highlights her internalization of the societal judgment of homelessness, especially of pregnant homeless women who should ‘know better.’ She is acutely aware that the majority of the non-homeless population looks down upon her lifestyle and the lives of those living on the streets.

Nikki has a cold, with a running nose and dry cough. Her jacket is partially unzipped, despite the cold evening air, and I wonder whether she may have a low-grade fever. She has four other children ages 4, 6, 9 and 13 from her previous relationship. Nikki was married to the children’s father, but the relationship ended when he dropped her in the middle of the street one evening; she has had no contact with him since that evening. She tells me that he is a ‘trust fund baby,’ who got clean and is now living with her best friend and their children. Nikki adds, “He’s got my four kids and her four kids just like one Brady Bunch Family.” I inquire further about her children, and she becomes visibly upset telling me that she doesn’t want to talk about her kids. I glimpse a temporary softening in Nikki’s expression; the love she feels for her children is clear. Distinctly separate from the hard life she’s living on the streets, she appears to experience conflicting desires. She adds, “I raised four kids, and it was like I had five, including my ex, and this is where I’m at now.” She does not intend to get sober at this time because the alcohol helps her remain detached from her past relationship and the loss of her children.

Nikki has decided that she will put the baby she is carrying up for adoption because she was drugged and raped at a party. She thinks that she slept for two days in a drugged state and discovered that she was pregnant a few weeks later, as a result of sexual assault. She reveals a history of being molested in the third and fourth grade and implies that she drank and used drugs over the years to keep the memories away. Her account of sexual assault has had far-reaching ramifications into her adulthood. Counseling and appropriate support would have served Nikki well and made it possible for her to mitigate some consequences of her sexual assault. Research shows that individuals with a history of sexual assault in childhood or adolescence are far more likely to experience re-victimization and even homelessness in later life. Alcohol and drugs are common coping strategies. Nikki has survived sexual abuse that began in her childhood, and she now faces competing priorities, which have created complex challenges in her adult life. Nikki has a tough exterior, built from trauma, addiction, and homelessness juxtaposed with an inner softness, which shone through in parts of the conversation as she described her past, her children and her uncertain future.

Nikki continues coughing sporadically and points to a lump on the side of her mouth that she hopes to get medically checked out. She describes her living arrangement as a camp of homeless people living in the woods. Her camp has often been broken up by the police, and she has been forced to move. It’s difficult to imagine feeling sick without easy access to medical care and an opportunity for the much-needed rest required for full recovery. As a homeless person, Nikki’s has reduced access to reliable nutrition, much-needed privacy, hygiene, and health care services. If she decides to get sober, she would require access to an inpatient medical detox program with supportive multidisciplinary care, where caretakers safely monitor withdrawal symptoms. These resources are challenging for homeless people to access. We end our conversation with an agreement for one of our volunteers to return with a list of resources and a warm sleeping bag.

As a mother of four myself, listening to Nikki talk struck an emotional cord and stirred a deep sadness inside of me. Throughout our conversation, I made a mental commitment to remain non-judgemental, acutely aware of the implacable meanness she faces from society. I recognized how easily my own biases might have prevented me from seeing Nikki with the compassion she deserved. My meeting with Nikki challenged my socialization to judge a self-described, “pregnant alcoholic.” Throughout our conversations, I found myself checking my privilege, where I do not have to wonder how to utilize resources. Socialization makes it all too simple for society to judge the behaviors of those who live outside our moral confines. Nikki’s trauma in addition to addiction led her to coping mechanisms many may deem morally ‘wrong.’ And yet, while listening to the story of her innocence lost too young and the tragic life events that forced her to grow up much too fast, I empathize with her story. Perhaps the emphasis should be less on the decisions one makes post-trauma and more on a culture that enables sexual assault and abuse without checks or safety measures to ensure counseling are readily and freely available. Nikki’s story isn’t only a culmination of her own decisions, but rather, our talk highlights a greater responsibility of society in general to reshape the lens through which we view homelessness, the lack of compassion we have for those who live on the streets and access to mental and physical health care in the United States.

“The most beautiful people I’ve known are those who have known trials, have known struggles, have known loss, and have found their way out of the depths.”