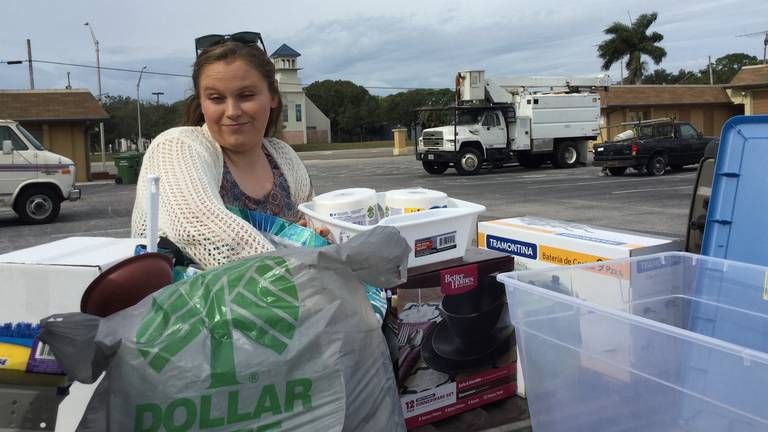 Erin Smith and her young son will spend Christmas in their first Bradenton home after spending nearly four months on the streets.

“It’s quite different,” Smith said. “It’s quite peaceful, which is a big change when you are used to chaos. Having such peace in our lives is a great thing to have.”

Smith escaped domestic violence while living in Maryland — and a few months ago, bought the cheapest airline ticket she could find. Her destination: the Bradenton/Sarasota area. She arrived with her son, two suitcases and a cat, not knowing a soul and not knowing what her decision would bring.
She started work in a restaurant, and before long, had enough to buy a used car, which became her home for a few more months. She started going to church — and the people she met would change her life.

Smith eventually found a small, affordable place to rent and landed a new job. However, as joyful as finding a home can be after months of being homeless, starting with nothing merely means you’ve found four walls and a ceiling — not a home.

For people like Smith lucky enough to find affordable housing through Turning Points or one of the local housing authorities, it can become overwhelming when they realize the financial strain of then finding furniture and basic household goods. A simple little hiccup like a plumbing problem could send some right back to the streets.

A new nonprofit has arisen within the circle of charitable organizations and individuals working in the community to help people like Smith get back on their feet.

Streets of Paradise is in a small storage warehouse where it operates out of one of bays packed with furniture and household goods. Since launching this portion of its mission in March, Streets of Paradise has helped furnish the homes of more than 130 individuals and families who have been referred to them by agencies that help people find affordable housing.

Though based in Sarasota, Cathy Bryant, director of operations for Streets of Paradise, said more than 90 percent of those they move are in Manatee County because affordable housing is easier to find than in Sarasota.

Easier, but not easy, Smith said, noting she was within a couple of days of giving up and returning to Maryland before the housing authority found her a place. A place that is becoming a home thanks to Streets of Paradise and others.

“We aren’t just housing people, we are creating homes for people coming off the streets,” Bryant said.

Thanks to a recently donated box truck, the moves are happening more swiftly, averaging around five a week. But they don’t just toss a bunch of random furniture into the truck.

Everything is coordinated so when placed into the house, it looks like a home. Bryant said people who are housed in these conditions are 87 percent more likely to remain housed if the unit is furnished and feels like home.

“And we don’t just move them in and leave them there,” Bryant said. “We stay in communication with most of them because we aren’t just creating homes, we are creating community. It’s not a Bradenton thing. It’s not a Sarasota thing. It’s an us thing, a community thing.”

A LIFELINE TO THOSE IN NEED

Licoski created a new program called “Been There Bins” — loaded with the things that most people moving into a new home forget about. Tweezers, dishes, nail clippers, plungers … it’s a bin that finishes off that difficult move and makes the transition easier.

Licoski is a proponent of organizing the various charitable efforts to have a single-focused mission in the community. Licoski said too many organizations focus on just feeding the needy and not enough think of other solutions.

She praised Streets of Paradise and hopes the community will rally behind the group’s efforts. The goal is to make them the primary source for household goods so others can begin searching for the next great community hole to plug.

“We are combining community together to really inspire others to want more for everyone else in the community,” Licoski said. “We want to share with the less fortunate in the community because we’ve all been there ourselves.”

Partnering with such agencies like Turning Points, Salvation Army, Suncoast Partnership, municipalities and law enforcement agencies, Licoski said it’s possible to meet the needs of the community if done right, and more importantly, done together.

“We are trying to inspire people to get outside of their little bubbles and see the suffering of others around them,’ she said.

WE CAN DO BETTER

Alayna Chavez is an example of how one person can make an impact on other people’s lives with a little effort and a desire to be involved.

Chavez is working with the “Been There Bins” programs, and she takes the donations to the next level with items like coffee pots — never forgetting the filters to go with them.

“It’s a big thing to be able to re-home people because you never know what they’ve been through in their life,” Chavez said. “They could have at one time had everything, wife and kids, and something happens to their job or they go through bankruptcy. Giving back is probably the best we can do because it helps everyone involved.”

Chavez is a plumber for Cool Today in Sarasota. She was recently recognized as Women’s Resource Center Magazine’s “Woman of the Quarter and Girl on Fire.”

For the past two years, Chavez has donated her time at the Boys and Girls Club to teach young girls that trade work can be a path to success.

She tells the girls, “Don’t be shy. Don’t let the men overtake your feelings and what you can do for yourself. Break through those barriers like I did.”

She’s had some good role models in her life, including her employer Jamie Didomenico, owner of Cool Today.

‘YOU NEVER KNOW WHAT THE NEED IS.’

Didomenico leads by example and is heavily involved with service-related organizations and charitable work.

“You never know what the need is,” he said. “When you connect with people like [Licoski], she finds needs that fall through the cracks. When she calls me and says she has a veteran that just got housed and needs bedding, can I help out, absolutely. It may be one veteran, but she’s changing that veteran’s life and maybe that one veteran then pays it forward.”

If you could call it a weakness, Didomenico said his charitable efforts probably appear all over the place, “but maybe that’s the design and maybe that’s where God is calling me.”

Didomenico empowers his employees to be involved in the community. He started the “Take Care of People” movement in his company.

If an employee responds to a service call on such recent cases as an elderly couple with no air conditioning or a single mom whose water heater blew out, he leaves it to the employee to make a decision.

“How can a company in our community walk away from that situation?” he asked. “My employees make the call. I’m not there. If they tell me it’s a TCP case, I provide them the equipment and they do the job on their own time. It’s kind of bled through our culture here.”

The program allows employees to not charge for the equipment or labor.

“The economy is good right now so if a company can’t help the community now, when can you? But this has been my mission statement since 2004,” he said. “It means you find the needs in the community and plug those holes. Even a small business can do something, donate their time or fix something small.”

HOW YOU CAN HELP

“Most people want to do something, but don’t know how,” Licoski said. “There are a lot of ways to help and many of those require very little effort that don’t require a financial strain.”

The harsh reality, she said, is that people can’t be sure where that dollar they stick out the window and give to a panhandler will go. However, that same dollar can go a long way if given to the agencies who truly do work to help people that are in genuine need of housing, finding work, avoiding eviction or getting help with substance abuse issues.

“It takes all of us coming together and every gift is worthy,” Bryant said.

Pulling that old winter coat that you never wear out of the closet. Stopping by the dollar store and buying a half-dozen plungers. Donating to the right agency that fulfills your heart’s desire. Answering your own question of, “How do I get involved?” There is no place like the community to make an impact.

Erin Smith knows firsthand how the community can change a life, and in her case, save a life.

“To have faith in yourself is the hardest thing because you have no self-esteem after living with domestic violence,” Smith said. “I hated myself for what I let myself be. But then I came here and once I had faith in myself, God makes everything possible. To any woman going through that, once you pull yourself out and have faith, God can pull you out of any situation. Don’t let anyone take from you.”

Streets of Paradise can be reached at cathy@streetsofparadise.org or 620-481-0446. If you have quality furniture or household goods to donate, reach out to them. Their biggest need right now is funding for a bigger space.

The Salvation Army has multiple programs that help change lives beyond its daily meals and being Manatee County’s only shelter. To learn more, visit salvationarmy.org.

There are many other organizations working in the community. If you need to know about how you can help, contact Licoski through the Facing Homeless Bradenton Facebook page.
Read more here: https://www.bradenton.com/news/local/article238622063.html?fbclid=IwAR2_1__YQjHEUc9QZuAsWolu3taQvNIPzz0m38VvAHMa6kiWDxEDHZyHXq8#storylink=cpy