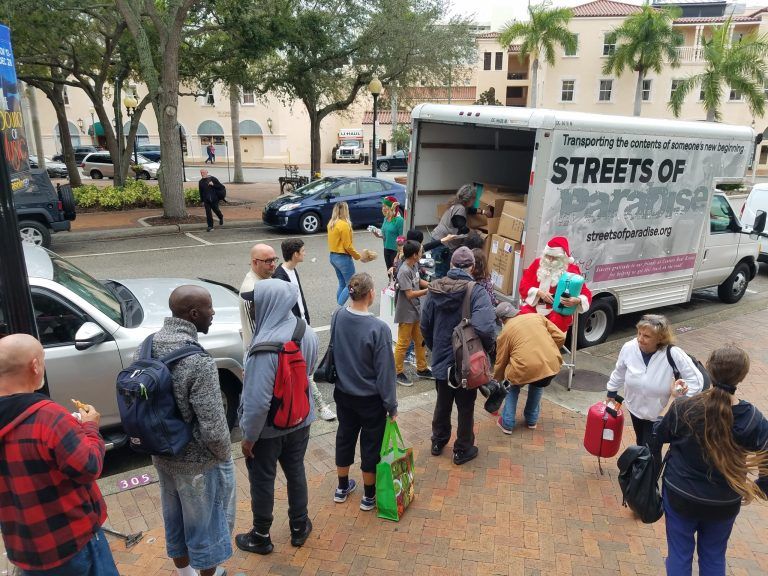 Written by Jenni Casale on December 27, 2019. Posted in Featured.

“Thank you, Santa. I wake up so cold.” “I just want to be warm, Santa.” “I’ve been really good, Santa. I don’t drink or do drugs anymore. Thank you so much for caring!” These were just some of the words of gratitude for the simple gift of a sleeping bag. The people thanking Santa were just a few of the many who are homeless in Sarasota, a city known for its wealth. A donation of 150 sleeping bags will allow 150 people to sleep a little warmer on the streets.

On the Sunday that started Hanukkah and marked the last Sunday of Advent, a local group called Streets of Paradise held their usual Sunday “food share.” But this one came with a bonus – Santa Claus appeared to give out sleeping bags, socks, refillable water bottles, and toys for the kids. There were also plenty of pictures taken by volunteers and some of the homeless. The smiles, and even the tears, were magical. The local blood bank had its mobile unit parked on the street and many of the volunteers took the opportunity to donate blood. Two local stylists gave haircuts to anyone who wanted one. And there was a long line of people waiting to get the hot, nutritious food brought by volunteers or dropped off by those who couldn’t stay but wanted to help. In a year of divisiveness and anger, the atmosphere was one of joy, but tinged with sadness as I reflected on who these folks are and what their life is like.

The good news for people who are homeless and must sleep on the street is that the courts have ruled that cities and counties cannot arrest and jail them. Granted, this ruling was in the Ninth Circuit and Florida is in the Eleventh Circuit. But generally, once one court has ruled, others will use that as a precedent, if needed. The Ninth Circuit ruled that a law in Boise, Idaho that criminalized sleeping in public places violated the individual’s rights, stating specifically that the law violated the Eighth Amendment. In their opinion, the judges ruled that “As long as there is no option of sleeping indoors, the government cannot criminalize indigent, homeless people for sleeping outdoors, on public property, on the false premise they had a choice in the matter.” There is a bit of grey area in this ruling with regard to the “option of sleeping indoors.” Even if there are shelters available, many on the streets cannot use that option for a variety of reasons: anxiety due to PTSD, active addiction, or having children or animals in their care. Many shelters are crowded, which can trigger someone with PTSD. They often won’t allow someone who is actively drinking or on drugs. And most shelters are for adults (sometimes adult males) and do not have the ability to take in children or animals. So, for many on the streets, they have no options. And with the Department of Housing and Urban Development reporting that homelessness went up in 2017 (the most recent year of statistics), finding enough shelter beds will only get harder.

Streets of Paradise is an amazing organization in Sarasota, Florida that is working to help those who have made the streets their home. It began as an informal gathering of volunteers brought together by community organizer Greg Cruz to provide outreach on the weekends to the homeless in the form of food and hygiene. In February 2018, Streets of Paradise was formalized as a non-profit and began to gain attention by the local media and people in the community wanting to help. It has grown from providing feasts on holidays to twice weekly “food shares” where the homeless can count on a filling meal provided by volunteers and pick up donated clothing and toiletries. The Wednesday evening food share is held outside the Salvation Army in Sarasota and on Sunday mornings food is available in three locations throughout the downtown area.

The most exciting addition to the programs that the Streets of Paradise provides has come in the form of “move-in” support for homeless individuals and families for whom appropriate housing has been secured. The data shows that when the previously homeless move into a home that is furnished and ready for daily living, very few of them wind up back on the streets again. This is in sharp contrast to the return to homelessness of people who are moved into an empty home or apartment. It makes sense to me. If I have a bed to sleep in, furniture to sit on, and dishes in the kitchen to eat on, I feel more grounded and secure. I have never been homeless, and yet I recall moving into my condo in Florida with just one box of kitchen supplies, some lawn chairs, and not much else. Fortunately, I had the financial ability to go out and buy a mattress and a few additional kitchen items while I waited several weeks for my furniture to arrive. I try to imagine what it would be like to move in with just a few clothes and, maybe, a sleeping bag. With little or no income, it would be very easy to feel despair and wind up back on the streets that I know.

In January 2019, Streets of Paradise began working with Suncoast Partnership to End Homelessness, the lead agency of the Continuum of Care in Sarasota, to provide furnishings for people who are being “re-housed.” Currently, Streets of Paradise has a VERY crowded, climate-controlled warehouse in Sarasota where donations of furniture and household items are sorted and organized for the multiple move-ins each week. The “Street to Home” program of Streets of Paradise transforms four walls and a door into a home for the individual or family. This gives them a jump start on a new life. Recently, thanks to a very generous donation from Allison Werner, owner of the local real estate company Couture Real Estate, Streets of Paradise has a wonderful truck to use for those move-ins. The truck was presented to the organization on the weekend of the 100th move-in. This allows them to save the $400 per day they were having to spend on renting trucks. And since the organization relies totally on donations, this is a huge savings. It will allow them to save up money for a Shower Truck or another, bigger warehouse!

In this time of giving and sharing, I really want to bring Streets of Paradise to your attention. I have been so happy to be involved with these wonderful people – although I have to admit I don’t do as much as I would like. If you want to read some blog posts that will tear your heart out, check out the stories about some of the people Streets of Paradise has worked with and gotten to know and love. They are amazingly resilient and positive given the stress and difficulty they face in their life. The website to learn more is www.streetsofparadise.org.

I know that every community across the country has its own population of folks who have fallen through the cracks and who live on the streets – a life that is much easier in Florida than it is in Maine or Minnesota! I keep thinking of the statement by John F. Kennedy: “For of those to whom much is given, much is required.” I have been blessed in my life and if I can give even a small amount of my time and resources to those in need, I will be doing my part. I ask that you find a way to do yours – today and throughout the year.