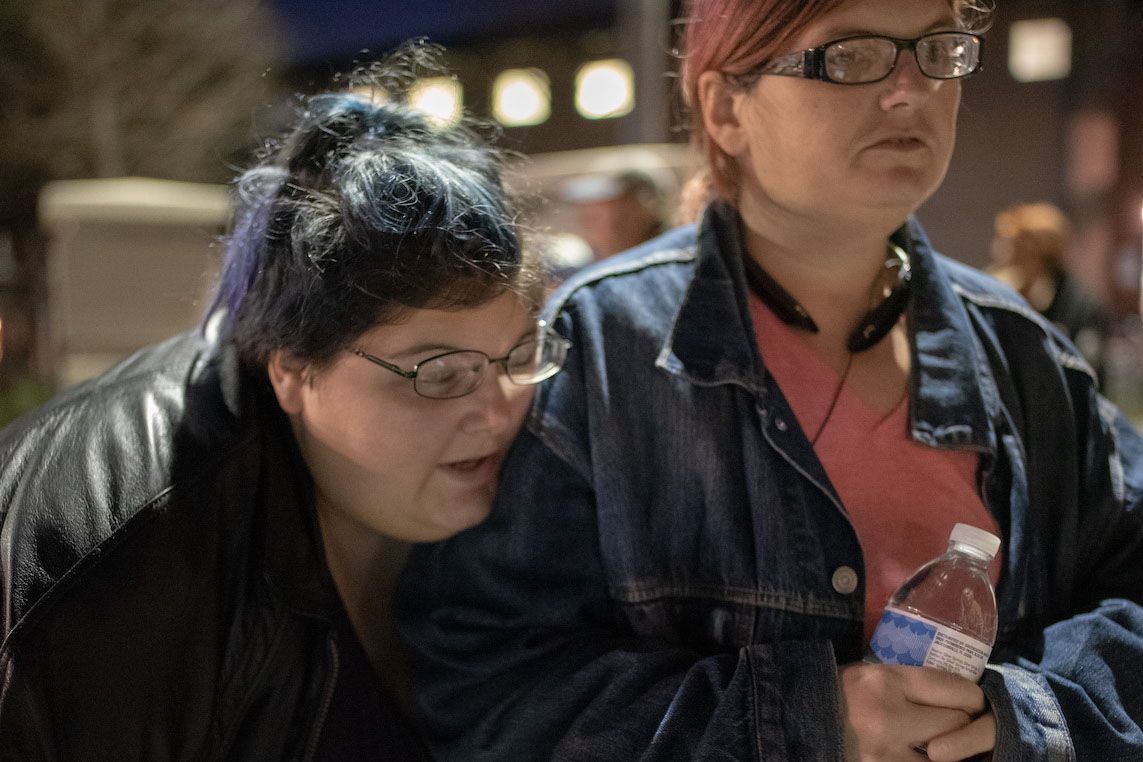 Written by Natasha Reisner on June 2, 2019. Posted in Featured, Stories.

I met Brandy, an engaging 39-year-old woman and her 20-year-old daughter Raven on a chilly Thursday evening outside the Salvation Army. We met while I was helping set up large tables to feed many homeless men and woman that look forward to the warm home-cooked meal that the Streets of Paradise volunteers donate. The warm rapport between mother and daughter is genuinely endearing. Brandy and Raven have been sleeping at the Salvation Army for the past three nights. Unfamiliar with the new surroundings they are afraid to close their eyes, exhaustion evident in their demeanor. Raven is on the autism spectrum and often misses social cues, further complicating many of her interactions at the Salvation Army.

We sat on the sidewalk and Brandy began telling me how they came to be in their unanticipated homeless state. As we continued conversing I was in awe in of the strong bond shared between mother and daughter. Brandy worked for little pay for Autism Family Center of Florida located in Sarasota and they were living quite comfortably in Church housing. When the church lost its lease, Brandy and Raven were given two weeks to find alternate housing. Without any savings Brandy felt helpless and did not have enough money to put down for the required first and last month’s rent, nor could she find affordable housing in Sarasota or its surrounds. As a last resort, feeling ashamed of herself she decided to check in at the Salvation Army for the night. Brandy’s experience is sadly not uncommon; she is one of the millions of Americans stuck earning low wages without benefits, unable to find affordable housing.

Brandy is determined to find work, but she is struggling without a car, carrying suitcases. Between tears, she says, “I never thought this would be me and Raven, I am homeless – I trusted the wrong people.” Brandy added, “We are homeless but we are not addicts or alcoholics, I just didn’t have savings and now I’m here.” It is impossible to grasp their trauma and the long term consequences Brandy and Raven will have due to their circumstances. Mother and daughter are undeniably down on their luck and in desperate need of a break.

Raven tells me that many people at the Salvation Army are mean and that she and her mom go to Resurrection House where they can do laundry and take a warm shower. Brandy smiles and adds, “ At Resurrection House, I got a little piece of normal when they gave me a blow dryer to use.” I glimpsed Brandy’s desire for normalcy from the lens of a mother that cares deeply about her daughter and cannot see a reliable way out of homelessness.

In the words of Dr. Martin Luther King Jr., “Life’s most persistent and urgent question is: ‘what are you doing for others?’”